How Does CBD Oil Affect The Human Body? 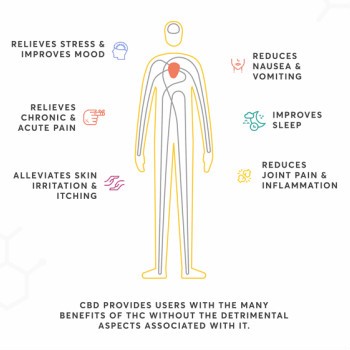 The Human Body Is Complicated

The human body is complicated, yet a brilliant network of systems, processes, and functions. CBD oil has shown to assist with healing in the body for symptoms related to anxiety, depression, pain, acne, heart health, as well as numerous other ailments. The incredible nature of CBD oil is that it works naturally with the body to further promote the functions our body already takes care of but may be struggling to execute at full throttle.

What Is CBD Oil

CBD stands for cannabidiol, which is one of the chemical cannabinoid compounds found in a marijuana plant. It is a common misconception that any association with marijuana must make you “high,” however, CBD does not contain THC. THC (Tetrahydrocannabinol) is the main psychoactive cannabinoid which gives a feeling known as being “high.”

CBD is extracted from the plant and diluted with an oil known as a carrier oil. Examples of this oil are coconut oil and hemp seed oil. The element of attraction with CBD oil is that there are coming-altering effects. More and more people are beginning to see the benefits of CBD oil as it works within the body to give relief to chronic pain and anxiety sufferers.

How CBD Oil Works In The Body

Naturally occurring in the body, the Endocannabinoid System (ECS) consists of an extensive network of cannabinoid receptors spread throughout the body. The cannabinoids that are released from the ECS system interact with the receptors of almost all the tissues in our body. The role of the ECS is to bring balance to these tissues such as the heart, the digestive, nervous, reproductive and immune systems. Basically, its main aim is to keep the body in a neutral state, and balanced.

Cannabinoid receptors are found in cell membranes of the body that are responsible for regulating your daily mood, appetite, memory and pain sensation. These receptors can be activated by naturally occurring endocannabinoids or, by the cannabinoids found in CBD oil.

The Benefits Of CBD Oil

CBD oil has anti-inflammatory properties which have a positive effect on the skin of acne sufferers. Acne is a common skin condition and occurs due to excess oil production, clogged hair follicles, bacteria and inflammation under the skin. Overactive sebaceous glands causing excess oil on the surface react positively to CBD oil as the control the overproduction of sebum.

Mental health disorders such as anxiety and depression have been traditionally treated with pharmaceutical medication which tends to have a negative impact on the body in ways other than what they are being used for, for example, drowsiness, mood swings, and insomnia. It is also not uncommon for patients to become addicted to this medication based on the chemical make-up of the drug.

The natural remedy of CBD oil for these conditions can be used safely and without fear of addiction. Additionally, the possibilities of over-using a product are drastically reduced. CBD acts on the brain’s receptors that produce serotonin, which is a chemical that regulates a person’s mood and emotions. It is the lack of serotonin production in the body that results in anxiety and depression.

The way that CBD interacts with pain receptors promotes the body’s ability to alleviate chronic pain and reduce inflammation.

CBD has been seen to minimize the occurrence of seizures in epilepsy patients. Seizures occur as a result of a dramatic change in electrical activity in the brain. CBD oil plays a role in reducing the chances of a seizure occurring by interaction with the receptors that alter brain chemistry.

There have been many individual cases where CBD oil has had a positive effect on a patient suffering from an ailment where traditional medicine has not helped them. As the benefits of CBD oil begin to get more noticed, the impact and use of CBD oil for healing is becoming more widely studied in the medical field. As the stigma surrounding the marijuana element of CBD oil decreases, more patients are able to appreciate and understand just how CBD works within the body and are able to see and feel the benefits.